Venezuela, the collapse of a rich country

Maduro took over in 2013 when Chavez died and brought the country to bankruptcy. In 2019, Venezuela is facing one of the worst economic and political crises ever seen in Latin-America. The World Bank estimates that 87% of the population lives below the poverty line. Civil unrest is rife.

Juan Guaido (Will Party – social-democrat), president of the National Assembly, proclaimed himself interim president in January 2019 and has been recognised by fifty nations. The future of the country is at the centre of geopolitical interests: Russia and China support Maduro while the US and most European and Latin-American countries support Guaido.

Chavez won the election in 1999 on promises of giving power to the people, and ending corruption of the traditional political parties that had governed Venezuela. He rewrote the constitution to perpetuate himself in power and got it approved by popular referendum. It enshrines free education, free health care, access to a clean environment, minority rights and popular sovereignty. He reversed IMF policies, imposed a fix exchange rate and paid back foreign debt. In the early 2000s, when oil prices soared, Chávez’s government consolidated its power over the economy and used oil funds to pay his welfare programmes, land reform, and the creation of workerowned cooperatives, disregarding investments necessary in the oil industry. 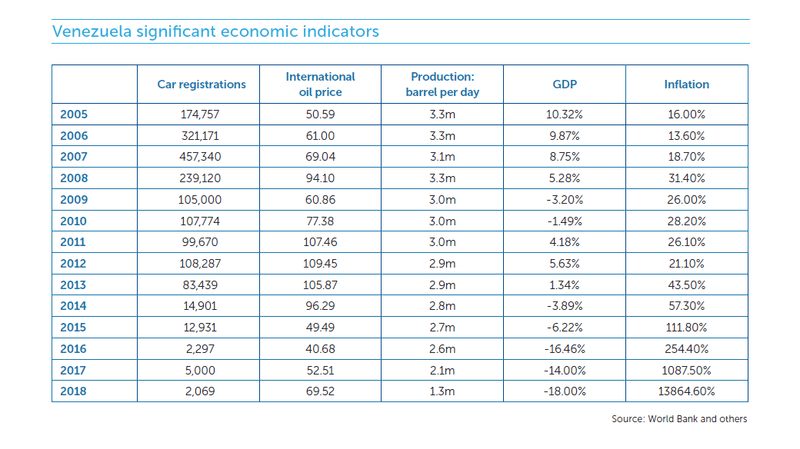 Venezuela has the largest oil reserves in the world. For twenty years and until 2010, daily production was above 3 million barrels a day. However, from 2013, production has been regularly falling down to around 1.5 million because of bad management by the military forces in charge. The US Energy Information Administration (EIA) predicts that oil production could fall to 700,000 by December 2019.

When Maduro took over after Chavez’s death in 2013, oil represented 95% of exports and more than 25% of GDP. With Maduro, Venezuela’s economy has steadily deteriorated. When oil profits began declining in 2014, Maduro began limiting imports needed by Venezuelans and shortages began to grow.

Foreign reserves, usually saved for economic distress, were being spent to service debt.

In July 2018, the IMF compared the hyperinflation in Venezuela to that of Germany in 1923. The collapse has led to shortages of food, medicine and other basic goods, and prompted an exodus of Venezuelans that has overwhelmed neighbouring countries. The United Nations estimates that 7% of the population (2.3 million people) have emigrated to escape poverty and violence. The country is ranked as the most insecure nation in the world by Gallup due to shortage and hunger: 98% of the crimes remain unpunished, while prisoners are abandoned and die in overcrowded prisons.

Mobility ecosystem is a ruin

The automotive sector has not been spared. Imports have fallen and internal production has slumped from 450,000 registrations in 2007 down to 2,000 in 2018. Drivers are finding increasing difficulties to keep their vehicles on the road. Fuel is almost free (one cent per litter) but petrol shortages are ever more common creating six hours or more fuel queues. To alleviate the shortage the government has organised a census likely to ration fuel and avoid smugglers reselling fuel for a profit in neighbouring countries. Batteries, engine oil, and tyres are prohibitively expensive – if they are available at all. Transport union leaders estimate that in just two years the country’s fleet of 280,000 passenger buses has dwindled to 30,000.

In 2017, the Venezuelan government took over a car factory owned by General Motors, a company that’s been doing business in the country since 1948. For years, they’ve struggled to import car parts and other raw materials due to government currency controls. In 2018 Ford produced and sold 1,000 cars, followed by Toyota with 600 and FCA/Chrysler with the remaining 400. The government has tried to remedy the situation by teaming up with Chinese companies to produce cars in Venezuela. During the military parade of 2018 marking Venezuela Independence Day, new Chinese military armoured vehicles were unveiled. Between 2005 and 2017, the China Development Bank and China Export-Import Bank have loaned more than $62 billion to Venezuela. 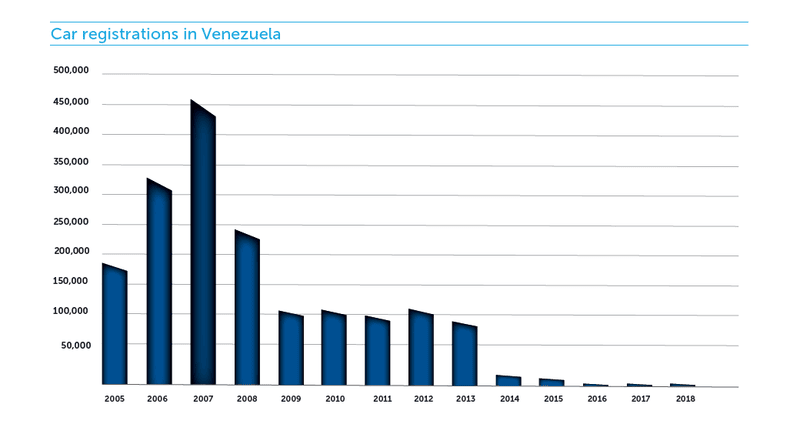 The White House’s measures to freeze PDVSA’s US assets, including proceeds from oil exports, largely cut off Maduro’s access to hard currency. Shortages weaken Maduro’s regime but the army which controls the economy has remained loyal so far. Foreign aid from the US stored along the Colombian and Brazilian border has not been able to enter Venezuela due to Maduro’s opposition weakening the regime’s support even more. US military intervention to oust Maduro remains unlikely and both Russia and China have threatened to defend the regime. Venezuela’s destiny is likely in the hands of its people and the capacity of Juan Guaido to win support from the army. It could be a question of days or months before the regime falls and a new era opens. Venezuela is rich in oil and should attract international support to accelerate reconstruction.